The CSJ hosted an event on the criminal justice system at the Attlee Foundation on Tuesday 30 March 2010 with Shadow Home Secretary, Chris Grayling MP. The event was for voluntary sector groups working with offenders and their families as well as groups working with those at risk of getting involved in criminal activity.

The CSJ is visiting Newcastle and Leeds this week for the final two events in the Spring CSJ Roadshow. The events have been organised to encourage voluntary sector organisations across the UK in their mission to transform Britain's broken society.

The Roadshows will provide an update on the nature of poverty and social breakdown in the UK today, an opportunity to hear from key CSJ Alliance partners tackling the root causes of poverty, and time for frontline poverty fighting organisations to build relationships with others who are transforming their city and communities.

This Thursday 15 April 2010 the CSJ will be travelling to Newcastle in the morning and then on to Leeds on Friday 16 April for a lunchtime event. Previous events this Spring were held in Bristol, Nottingham, Birmingham, Manchester and Liverpool.

Venue details and how to RSVP available at www.centreforsocialjustice.org.uk/roadshows

The CSJ continued to push for a vision of full recovery from addiction at an event in Northern Ireland last month. The 'Addiction in Northern Ireland' seminar at the Inverary Community Centre, Belfast on 30 March 2010, provided voluntary, community and statutory sector workers from across Northern Ireland with a presentation of our policy recommendations and an analysis of current failures in policy approach.

To donate to the Centre for Social Justice
www.centreforsocialjustice.org.uk/support

Click here for latest pictures of the CSJ Roadshows and regional events
.

IN THE NEWS
The CSJ was mentioned in the following articles since our last email news letter on 24 March 2010:

The Independent, 5 April 2010
I have never known the Tories to be so committed to the poor
Read here

The Guardian, 31 March 2010
G2: Life on the edge: The mantra of 'Broken Britain' has been a potent theme for the Tories.
Read here 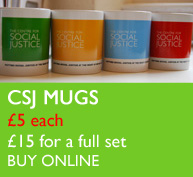