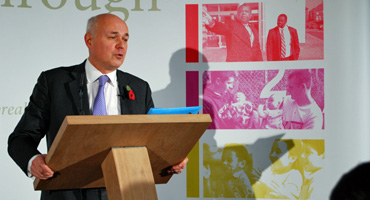 You are invited to a Public Policy Briefing on Monday 2 November 2009 at 11.30am - 1pm at Clifford Chance in Canary Wharf, London. The briefing will be on the last instalment of our criminal justice work on courts and sentencing.

This will be of particular interest to those of you working with ex-offenders, with young offenders, and those caught in the revolving doors of sentencing and re-offending, or working within the prison system.

To RSVP email amanda.taylor@centreforsocialjustice.org.uk we'd love to see you there.

THE ATTLEE FOUNDATION JOINS THE CSJ ALLIANCE
The Attlee Foundation is the most recent group to join the CSJ Alliance, having joined today! Established in 1967 in memory of former Labour Prime Minister Clement Attlee, the charity works to continue the legacy of the former local MP by investing in the lives of young people in order to provide them with a better future.

Of particular interest was the work the group are doing with the local Bangaldeshi community and children with special needs.

Iain Duncan Smith MP spoke at the Attlee Memorial Lecture in May 2009 explaining the Breakthrough Britain work which was well received. Pictured is Tracy Fletcher, CEO of the Atlee Foundation with Chris Bullivant, CSJ Projects Director.

Chris Bullivant, CSJ Projects Director, recently met up with Microsoft and their public affairs team who were enthusiastic about the work of the CSJ Alliance. For those of you with charitable status, Microsoft offer various schemes to help with your IT needs, from free training, free software, and even volunteering from IT experts.

Website- A dedicated Microsoft portal aimed at providing the voluntary and community sector with inspiration and information on the current Microsoft schemes. To access please visit www.microsoft.com/ngo

Training:- Microsoft provides a free training curriculum that allows people the opportunity to complete the basic level of Microsoft training. It is accredited by OCR and provides a certificate of completion. To find out more please visit www.microsoft.com/uk/dlc

Volunteers:- Microsoft employees are entitled to 3 days a year volunteering leave. If your organisation has the need for a team of volunteers or has a specific IT volunteer requirement please email i-karing@microsoft.con

PUTTING SOCIAL JUSTICE AT THE HEART OF PARTY CONFERENCES 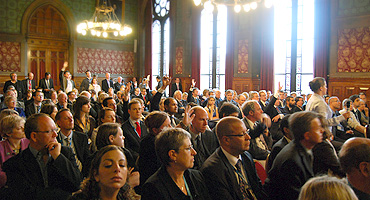 We were delighted with the CSJ events during the Labour, Conservative and Liberal Democrat Party Conferences this year with over 1,500 guests attending our fringe meetings and roundtable discussions.

We were also able to present on over 10 new policy areas, that many of you have contributed to, during the Conservative Party Conference. Topics included gangs, Police, prisons, the care system, social housing and family law.

The picture above is from our "Education" fringe with Michael Gove MP. Sixty guests squeezed in to stand after extra chairs were put out for 140 seated guests. The "Education" fringe was part of our flagship policy events along with a fringe on "Family" and "Welfare Reform" aimed at reversing social breakdown.

Thanks to the many of you who contributed evidence to the reports that we presented at Conference.

THE CSJ ALLIANCE
The CSJ Alliance is the growing network of voluntary groups identified by the CSJ as doing exceptional work in tackling poverty and its causes in the local community across the UK.

He spoke of his own experiences of the courts and sentencing system and how Eco-Actif had helped him. For the CSJ staff at the meeting Lee was "a conference highlight!"